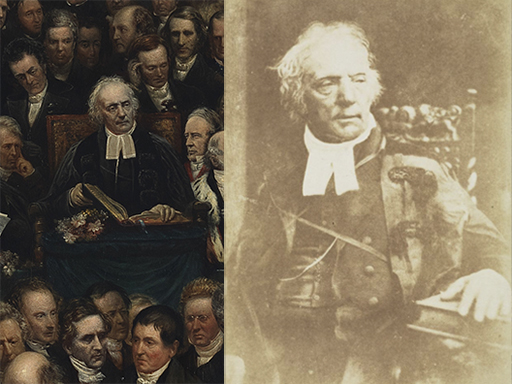 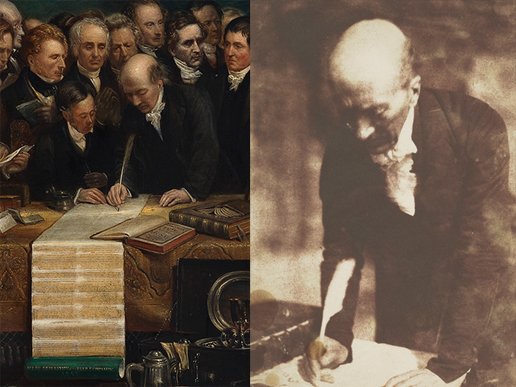 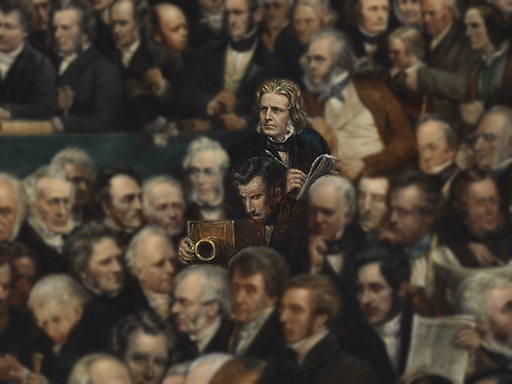 Hill’s large painting showing the First General Assembly of the Free Church of Scotland, signing the Act of Separation and Deed of Demission at Tanfield Hall in Edinburgh is a massive canvas that features over 400 ministers. In the centre, signing the document, is the portrait of the Rev Dr Patrick Macfarlane whose photograph is on the wall adjacent. The photograph shows Macfarlane with quill in hand, the same composition that we see in the final painting. Directly above Macfarlane is the figure of Thomas Chalmers the first moderator of the Free Church of Scotland who is shown with an open book looking out to the hundreds of people all around him. This is also based on a photograph, as are all of the portraits represented in the painting. Take a moment to see if you can match up the photographs on the adjacent wall with their corresponding portrait in the large canvas here.

To the right of Chalmers, just down a little bit and to the right section of the painting, we can see the figure of Robert Adamson complete with his wooden box camera. Above Adamson is Hill himself apparently sketching or making notes in a notebook. Hill was actually there at the event but Adamson wasn’t, so his appearance in the painting is actually a bit of an artistic conceit on Hill’s part. And there are actually many people present in the painting who were never actually present in real life. If you look up at the skylights on both the right and left side you see a number of Newhaven fisherfolk represented. Again it’s unlikely that they were present at the event, but Hill included them, in part in recognition of his photographs of the Newhaven fisherfolk that he made with Adamson. Ironically as much as Hill took on photography as a way to expedite the painting of this large canvas, in the end it took him 23 years to complete the painting.

In the intervening years many of the subjects had died, all of them had aged. For Hill then there was the challenge of trying to remain true to the event but at the same time recognising that many of these ministers looked a little bit different now. What Hill did was go in and age some of the sitters, greying their whiskers or making them appear more bald, creating a disconnect with the actual photographs. We are left with a curious account then of how things were in 1843 and then how people were in 1866, the time that he completed the canvas.

With the painting becoming this pastiche of 1843 portraits along with aging 1860’s portrait, it met with a mixed reception when it was finally completed. One contemporary, the artist Sam Bough, referred to the ministers as “rows of potatoes”. Hill himself, no doubt relieved to have completed the painting after two decades of working on it, commissioned the photographer Thomas Annan to make a photograph of the finished painting with the idea that he would then produce carbon prints that would then be sold to the public. It was an interesting decision that this large painting that started with photographs should then end with photographs.

Update Required To play audio, be sure to enable JavaScript, and run a browser that supports HTML5 MP3 audio, or update your Flash plugin.
5
7