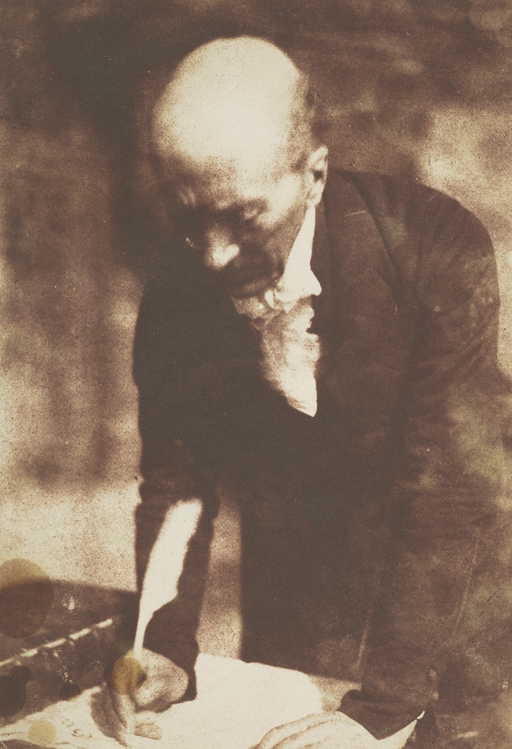 Hill & Adamson were faced with a particular challenge in trying to photograph the hundreds of ministers that were involved in the formation of the Free Church of Scotland. They had to come up with a formula of how to photograph them in the most efficient way, and in looking at the photographs you can see that, for the most part, they have the ministers seated on a chair and typically holding a book or leaning against a book on a table. And there’s a practical reason for this; with the exposure times varying they wanted to prevent the ministers from fidgeting, from moving their hands around, so if you hold onto a book it gives you a purpose, a job, for the duration of the photograph.

The book also served another function, it also illustrated the intelligence of the men, that they were learned, that they were men who studied the bible, so in many cases the book that we see is in fact the bible. But that’s not to say that all of the men were treated in the same way. Hill & Adamson did succeed in bringing out something of the individual character of each and every person, and in certain cases some of the ministers had a specific role to play in the church and so Hill & Adamson’s photographs reflect that also. A good example of that is a portrait of the Rev Dr Patrick Macfarlane. Macfarlane was the first person to sign the Deed of Demission. The Deed of Demission was the official document ratifying the break away from the Church of Scotland; the formation of the Free Church of Scotland. And he was chosen at the first signatory because he was the richest man in the Kirk. He came from Greenock, he had a large stipend, and in leaving the Church of Scotland he was giving all of that up. He was giving up the money, his home, his congregation, and he was now establishing a new church, a new congregation and with new financial commitments. He was held up as an example of the personal sacrifice that was at the heart of this decision in forming the new church.

The truth is that all the men had some sort of sacrifice to make but Macfarlane really does have this key role. So in the photograph we see him with quill in hand and the document underneath and he’s bent over and signing his name. Now of course in the photograph this is being recreated because the event has already happened but Hill & Adamson are trying to recreate that particular moment so that Hill can translate this photograph to his finished painting.

Update Required To play audio, be sure to enable JavaScript, and run a browser that supports HTML5 MP3 audio, or update your Flash plugin.
4
6