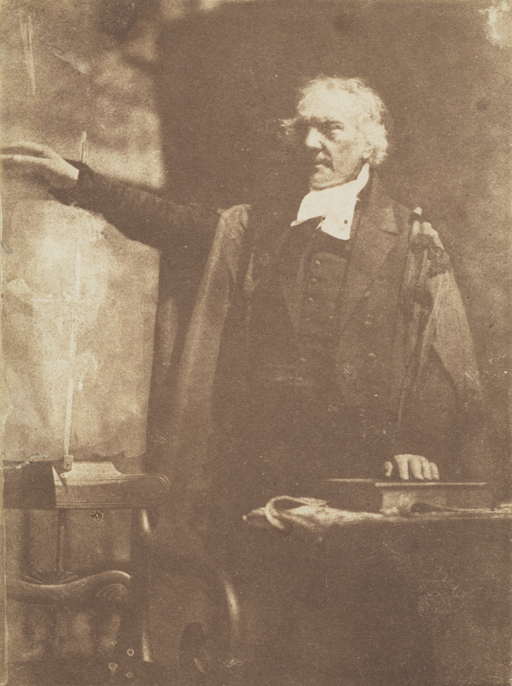 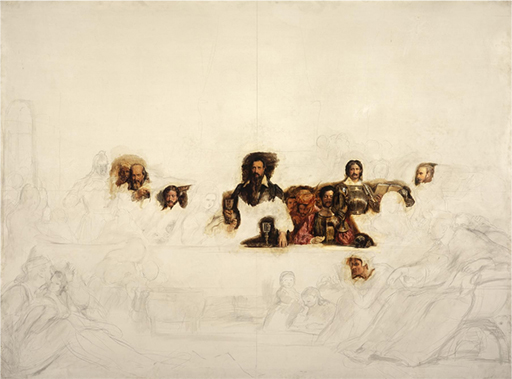 Hill was so moved by the events around the formation of the Free Church and wanted to set about recording this grand historical painting, and of course as moderator of the Free Church, Thomas Chalmers was a central figure to Hill’s composition. He was someone who was going to have an important role and in this photograph we see him standing in his religious robes, his arm is outstretched, he is preaching and looking out to what we assume to be the congregation.

It’s interesting because the photograph actually relates to a sketch drawing that Hill also did around this time around 1844, and that drawing which is just to the left of the photograph has the same figure with the arm outstretched. Hill was actually influenced by an earlier work by Sir David Wilkie entitled John Knox Dispensing the Sacraments at Calder House. This was an unfinished painting from about 1840 that shows the figure of Knox in the middle surrounded by lots of other people. So it’s clear that Hill was looking to this painting as an influence for his own, but at the same time using photography as this modern technology to assist him in getting all the necessary portraits in a quicker amount of time.

If you look closely at the photograph and particularly at Chalmers’ outstretched arm you’ll see that there’s an area in the composition that looks like it’s been rubbed out. This is actually a brass clamp that was supporting his hand during the length of the exposure which at this time in photography could have been anywhere between several seconds to several minutes. It was all depending on the sunlight, the natural light available. And this is an important point to remember because all of these photographs were made outdoors.

While we talk about the studio at Rock House, in effect the studio was the garden outside the house and in this area they would bring out chairs and various props, tables, backdrops, and it was there that they would stage and set their sitters. So the view of Chalmers standing by the table with a book under one hand and another arm outstretched over a chair, this isn’t an interior shot, this was made outdoors.

Update Required To play audio, be sure to enable JavaScript, and run a browser that supports HTML5 MP3 audio, or update your Flash plugin.
3
5