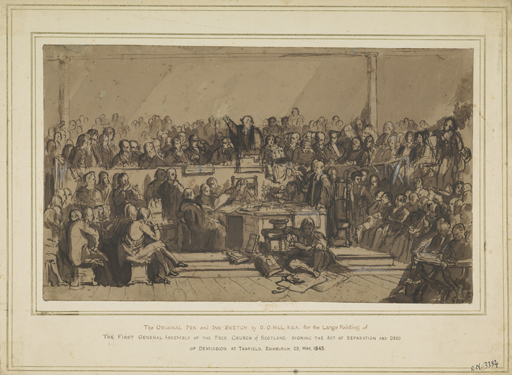 David Octavius Hill, The First General Assembley of the Free Church of Scotland, Signing the Act of Separation and Deed of Demission at Tanfield, Edinburgh, 23 May 1843.

There’s one very important event that was responsible for Hill & Adamson coming together and that was the disruption within the Church of Scotland and the formation of the Free Church of Scotland. Now, for many people today that’s an event that might not necessarily have any resonance, but back in 1843, this was the most important thing that was happening within Scotland. In many ways it’s a bit like what we’re going through today; where there’s a lot of debate and issues around the fate of the country and what will happen within this larger global context. Those kind of feelings, those passions, those sentiments in many ways were quite similar to what was happening in 1840’s Edinburgh, where a number of ministers from the existing Church of Scotland decided to break away to form their own church, their own denomination, which was the Free Church of Scotland.

Now this had consequences for people up and down the nation and when the ministers decided to break away and form their own church, e event taking place in the capital. They basically walked out from the General Assembly which was being held at a church down on George Street and those ministers then walked down George Street, down Dundas Street, to Tanfield Hall. It was a spectacle and was something that was being reported about in the newspapers. There were people gathered in the street and Hill was one of these people. He was so moved by these men standing up for what they believed in and the sacrifice they were making that he wanted to commemorate this event with a grand historical painting, and set about to do so almost immediately.

There were over 400 ministers involved in the General Assembly and he very quickly realised that this was going to take quite some time in order to get everybodys likeness. It was very important that he did get everybodys likeness and that it be a true depiction of those men involved because democracy was very much at the heart of this breaking away and so he felt it had to be treated as such, with equal weight for all of the men.

Sir David Brewster, in learning about Hill’s intention to make this big painting, said ‘well, you might get in touch with this young man who’s just set up a photography studio on Calton Hill. I’m sure he would be able to help you in your process to achieve the portraits much faster’. So that’s essentially what brought these two men together, through the suggestion of Brewster, but ultimately it was this massive schism within the Scottish church, that brought them together.

Update Required To play audio, be sure to enable JavaScript, and run a browser that supports HTML5 MP3 audio, or update your Flash plugin.
2
4