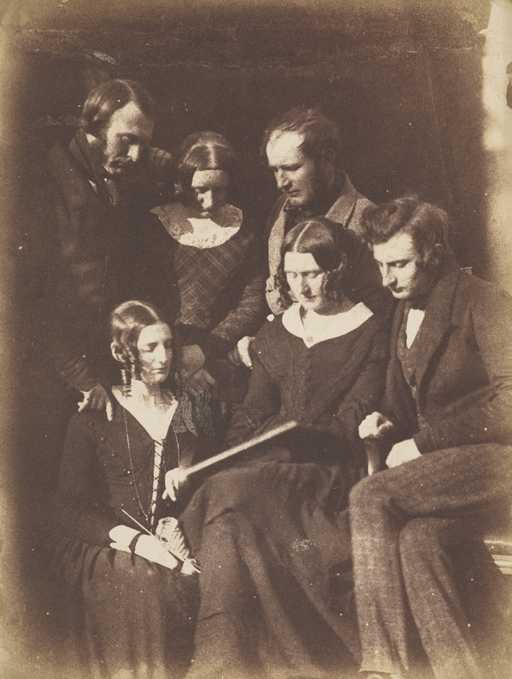 In this final section of the exhibition we return to Adamson’s family and a portrait that features both him and his brother Dr John Adamson, who taught Robert photography, his other brother Alexander Adamson, his sister Melville, and his sister in-laws.

One of the successes of Hill & Adamson’s photography is that they really show the people and places of 1840’s Scotland as they were. This portrait is something we can relate to in 2017. Everyone can relate to that ‘coming together’ to take a family portrait. What’s interesting here though is that all the sitters appear to be looking down, none of them are looking at the camera. Why is that? It’s quite possibly because the exposure time would have taken up to several minutes making it difficult to keep everyone focused.

Adamson was very close to his family. Every winter he would retire from Rock House, pack everything up, and go back to St Andrews to be with his family during those winter months when it would have been impossible to photograph in the inclement weather.

We know he was close to his brother John who taught him photography. It’s somewhat bittersweet then to think that Robert died at such a young age, only 26 years old. That this very vital part of this close family and a vital part of this partnership with David Octavius Hill is suddenly extinguished.

Adamson really was an amazing photographer. The frustration we have today is that we just don’t know enough about what he knew at the time. We’ve got Hill writing about him saying he knows things that others do not when it comes to photography, that he’s going to take the artform into the future. There are all these tantalising clues about what he was doing with photography but we don’t really hear anything from Adamson himself. He was really a very quiet character, but what we do have and what stands as his legacy are of course these thousands of photographs that survive and that reveal not only how proficient he was but also how he excelled at photography. These photographs are able to last the test of time and they still engage us today just as they would have in the 1840s.

Update Required To play audio, be sure to enable JavaScript, and run a browser that supports HTML5 MP3 audio, or update your Flash plugin.
14
16