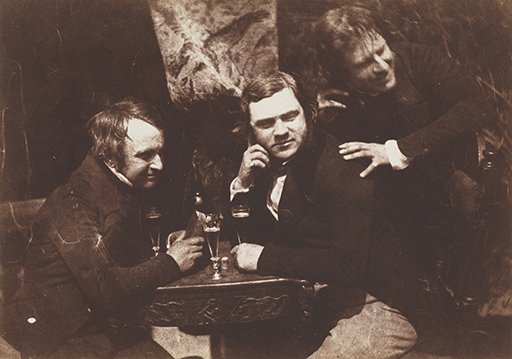 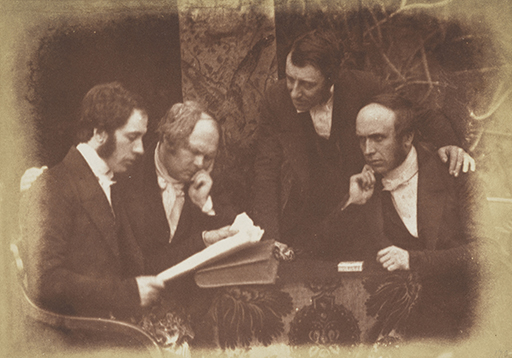 In Hill & Adamson photography entitled Edinburgh Ale we see Hill making one of this infamous appearances. He was of course the most featured sitter in their work. And here he appears with his friends Dr George Bell, Hill’s got his hand on his shoulder, and sitting opposite Bell is James Ballantine. And on the table in front of the men are three lovely glasses of Edinburgh’s Finest Ale which at the time had a reputation for being very strong and potentially had the ability to ‘glue the drinker’s lips together with its potency’.

Clearly this is early on in the proceedings and the men are having a nice time together and seem to be looking off camera and maybe sharing a joke, and it shows a nice moment together. It sort of speaks to how relaxed these photographs are with Hill & Adamson really able to bring out the best in people and it’s not what we think of as a stereotypical Victorian photograph of this stiff gentleman sitting upright in a very sterile studio environment. This is actually friends gathered together to have beers and have some laughs.

Now if you cast your memory back to one of the early minister portraits, the group of ministers from the Dunbarton Presbytery, you can see that it’s the same setting, they are gathered around this table, several of them, in the background is a patterned tapestry or a patterned piece of fabric that features an eagle swooping down between the men. Now this appears here in Edinburgh Ale and also appears in Dunbarton Presbytery. So it again speaks to this formula that the photographers were using and what they knew would work, what was successful for them. Only here we’ve kind of swapped out bibles for beers.

Update Required To play audio, be sure to enable JavaScript, and run a browser that supports HTML5 MP3 audio, or update your Flash plugin.
13
15