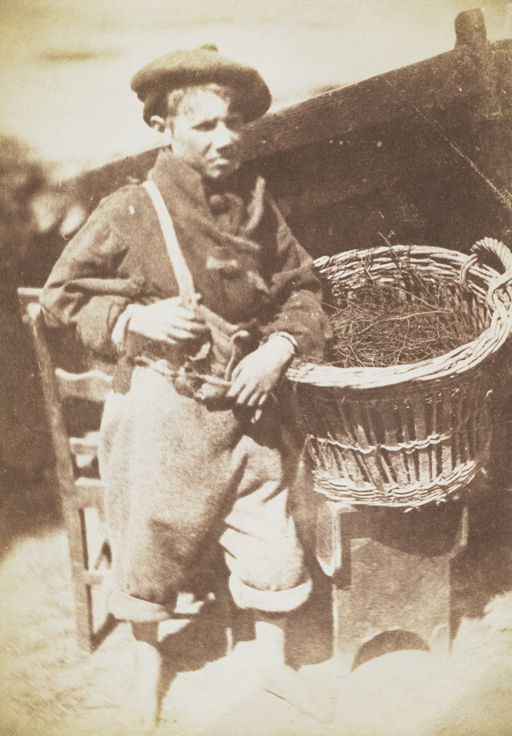 This photograph is known for an inscription that Hill applied to it which is “His Faither’s Breeks, he hath girded on”. And that basically translates as his father’s trousers he had belted around him. And if we look closely at the photograph we can see that this wee boy is wearing trousers that are way too big for him, they are rolled up so he can actually wear them. And there is indeed a kind of belt around his waist and braces just to keep them on. And in many ways this suggests that the little boy is following in his father’s footsteps which was tradition in Newhaven where fishing skills were passed down from one generation to the next, but it also hints that he may be taking on this role before he’s ready for it, before his age, and that might suggest that he is in fact an orphan. And indeed life fishing in the North Sea in the 1840s was incredibly treacherous and there were many orphans and widows that feature in the village in those years that Hill & Adamson photographed.

There was a very bad storm in the 1840s that resulted in a number of lives being lost up near Aberdeen, none of which included men from Newhaven. However, in the parliamentary enquiry that came about afterwards, talking about the state of fishing in Scotland at this time, the Newhaven boat was singled out as being the second worst boat in operation and it was only through the skills of the fisherman themselves that they were able to catch anything and stay alive. So this was a very real concern and it’s interesting that of all the 120 photographs that Hill & Adamson made around Newhaven, this is the only one to show a child on his own, further emphasizing this idea then that he is in fact an orphan.

With his small size here, they’ve used different props to help him pose for the duration of the exposure. He’s leaning against a chair and he’s also got a basket of nets beside him and the basket is on a stool just to get to the right height to support his arm. So these are all little touches that Hill & Adamson are bringing in, in order to make this photograph appear as natural as possible in the sense that the pose is as natural as possible.

Update Required To play audio, be sure to enable JavaScript, and run a browser that supports HTML5 MP3 audio, or update your Flash plugin.
12
14