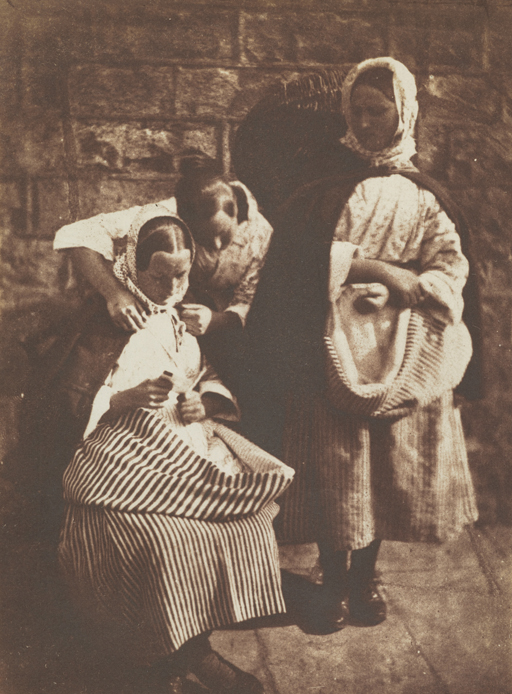 In this portrait we see three of the Newhaven fishwives who are shown in their traditional dress, their striped skirts, their patterned tops, and their woolen capes. And these clothes were in part for warmth, because they were out on the shore repairing the lines for the men when they were at sea. When the men came back with the catch they were then gutting the fish. There was hard work involved, they were taking the produce, the catch of the day and walking it into town with the big heavy baskets on their backs and selling the fish to the people and establishments in Edinburgh.

Here Hill & Adamson are showing us a particular scene where they are reading a letter and this is interesting in the way that it’s sort of suggesting that the women are literate showing that this small working class community is educated; they can read. It is also suggesting this connection with their family members such as their father, or husband or brother who is fishing further up the North Sea and from a port of call are sending word back to say that the fleet is ok, that everyone is fine.

The woman is reading a letter and of course this is a very typical style of painting in art history that we see in Dutch genre painting and Hill as an artist would be very much aware of this and would be influenced by these types of works and looking to incorporate that into his photographs.

As spontaneous and natural as this seems though if you look closely you can see that Hill & Adamson have once again brought the studio down to Newhaven. The woman who’s standing, if you look closely to the edge of her skirt at the right of the frame, you can see a silhouette of a tripod leg, and this tripod is actually holding a brass clamp that is keeping the woman in position. Also the woman who is leaning over has her arm being held up by another brass clamp that is sort of blended into the stonework of the wall behind her. These were all subtle ways of controlling the scene and making sure the women were able to hold their poses for the duration of the exposure but is also something that is quite remarkable because it doesn’t take away from the naturalism of the scene. They still managed as photographers to have the women participate in this setting, in this arrangement and that really gets to the heart of Hill & Adamson’s special chemistry; that they were able to elicit from their sitters this very natural appearance even though it was a highly controlled environment.

Update Required To play audio, be sure to enable JavaScript, and run a browser that supports HTML5 MP3 audio, or update your Flash plugin.
11
13